The Debt Collection website is run by a UK based debt collection company providing businesses in the UK with a ‘No Win No fee’ debt collection and recovery service with several options for collecting outstanding debts. 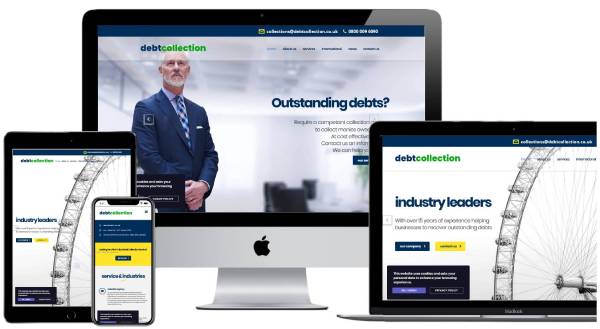 The Challenges Too Few Leads + A Penalised Domain!

His company had a good reputation and track record with helping its clients collect and recover outstanding debts. But the lack of constant new leads being generated via the company website meant it was in serious trouble.

Chris came across SEO (search engine optimisation) and realised that it was a cost-effective way to get qualified leads via his website. His lack of experience and expertise meant looking for a reputable agency to handle all the site’s SEO.

He quickly found what he thought was a reputable SEO agency. Initially, things were good. The website started to rank for competitive terms fairly quickly and there was a flurry of new leads coming in. Everything looked rosy. Chris felt that he could finally put his worries behind him.

But that didn’t last for long.

Unknown to Chris, his recent flurry of new leads was a direct result of spam and black-hat tactics. Namely the use of PBNs by his then agency to increase his website’s authority and rankings.

It was only a matter of time before Google caught on and effectively penalised his whole domain for violating its best practices. The results were devastating. Not only had the site been added to a blacklist the leads that were being generated disappeared overnight. 😱

For a while, Chris tinkered with the site’s SEO himself. Initially, his internal efforts resulted in new leads here and there. But his tinkering quickly resulted in killing off what little traffic the site was getting.

He was also spending all of his time on this new marketing activity and not on client cases!

It wasn’t sustainable. The hunt was on again to find a debt service SEO expert to help propel his website to the top of search results and start getting new leads. This time it had to be the right way. With a little experience behind him, he knew who to avoid and what questions to ask.

After having spoken to many different companies and freelance experts he found us: Valen Digital. Following the initial conversation, he knew he had found a legitimate company that could help his business.

After a technical audit and careful analysis, it was quickly decided that the website needed reworking from the ground up. Not only had the site been hit with a penalty, but it also wasn’t mobile-friendly, didn’t target the right keywords and was using a very old and cumbersome CMS system.

For Valen digital, this was a serious challenge. Not only did the team have to deal with the current penalty but they needed to build a mobile-friendly site and all the while building up the site’s authority.

We had to act fast but without using any unethical tactics or by taking any short cuts to ensure we could catch up to the competition.

The Valen Digital team first addressed the penalty by cleaning out the spammy PBN links from the backlink profile and submitting a reconsideration request in conjunction with a disavow file.

The second step entailed a detailed keyword and topic research plan. This uncovered hidden gems which could be used for the site to generate more quality leads with a high intent value.

The third step involved mapping out the keywords and topics to relevant pages via a sitemap. Optimised content was then created around those topic and keyword ideas to help the site rank and convert new visitors.

The fourth step was to create a mobile-friendly website that was fully functional yet looked professional. The new pages and content were added to the site which sent the right signals to the search engines.

All the while the team focused on an ethical backlinking strategy. This involved professional outreach to get links from websites that were already trusted by Google.

To further capitalise on the work being carried out, the on-page schema code generated for the site would provide the relevance and E-A-T signals the search engines were looking for.

The Results Double the leads & 1,680% increase in traffic

In a little over 2 years, the debt collection agencies organic website traffic increased by a staggering 1,680%.

The new mobile-friendly website is one of the cleanest developed for a debt services company and sits on top of a world-class CMS platform. This gives Chris the ability to deploy additional sub sites on demand to capture more traffic and visitors from the smaller towns and cities in the UK.

The website also benefits from topic-focused content in conjunction with custom schema code integration. This provides the search engines with higher relevancy and more E-A-T signals which they love.

These changes have resulted in a substantial increase in website traffic generating over 55% more leads and higher conversion rates.

Since these changes, Chris has stated that at times the number of leads coming through was too much for his small team to handle. Our response: It’s always good to have more business than none at all 😎

An SEO Agency That Gets You Results

Our business boils down to the number of leads we get. You may be the best company around, but if cant get new customers, then you don’t have a business. Our lead pipeline is up by around 55% compared to 36 months ago which has allowed us to grow and bring in new staff. The proof really is in the pudding. The results an SEO agency delivers can make or break your business. If they can generate new leads for you then they are good at their job. Valen Digital does this really well and beyond expectations.

At the Debt Collection Agency, you will find a fast and efficient debt collection service and a team of professionals committed to helping you collect your debt.

The website is a B2B agency for collecting debts worldwide.

If you want to succeed online and make your business a success, then get in touch today. We look forward to sharing our SEO expertise and knowledge with you.

We are Experts in World Class Technologies Such As: